Competence, flexibility and willingness to innovate: these are the business guidelines followed by Asglatex Ohorn GmbH

With all the consequences that come with it. With a tradition of 90 years in the development of technical fabrics, our mid-sized company has been able to succeed in the market, and we today boast outstanding quality and short production times when serving our clients.

Our modern production system allows for a wide range of high-quality products. The core competences lie in the manufacturing of glass mesh fabrics and reinforcement accessories for the building industry. Our range of products is supplemented by the sale of technical fabrics for use in various industry branches as well as heating and fire protection. 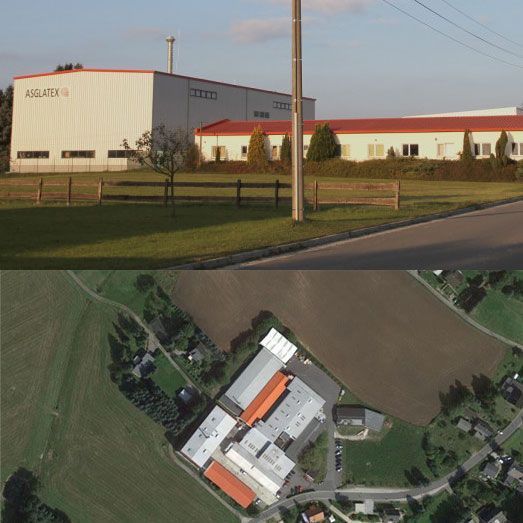 The roots of our traditional company reach back many decades. The company was founded in Dresden in 1922, as Geyer & Co., and it originally manufactured shoe creams under the name “Geyerit.”

Already in the mid-1920s, in Dresden the company started to manufacture fabrics and bands for technical purposes, and it developed into a lucrative company.

In 1931, the site in Dresden was no longer enough. The company Geyer and Co. acquired a new site in Ohorn. In the years that followed, more branches were established in Ohorn – the demand for the manufactured products remained strong. At this time, around 70 employees worked in Ohorn.

A New Begining After War

In 1945, both major sites, the one in Dresden and the one in Ohorn, were lost due to bombing attacks and they could not be rebuilt. Under very difficult conditions, the production in Ohorn recommenced after the war ended, with eight workers.

With the continually increasing demand for work protection clothing in the steel industry and in iron foundries, production soon increased, and the company was able to establish its own clothing department.

As the result of the political developments of the German Democratic Republic, the reborn company was fully nationalised by the year 1972.

The company merged with VEB Verotex in 1974. The new company also got a new name: “VEB Asglatex Ohorn”.
In the following years, weaving capacities continued to be developed, and exports to other countries increased strongly. In order to meet the continuing demand and to concentrate on the available capacities effectively, more operations were integrated, step by step. With this, the number of employees in the company reached 222 by the year 1986.

When Germany was reunited, however, the usual markets collapsed. Production had to be cut back and the workforce had to be drastically reduced. At the beginning the company was placed under the administration of the German privatisation agency.

Embarking On a New Era

In 1992, the company was privatised, and it began a completely new chapter in the company’s history. The company restarted under the name “Asglatex Hitzeschutzmaterialien GmbH Ohorn”, under the auspices of its new owner Gerhard Bürger, with 23 employees. The company specialised in the production of reinforcement fabrics for buildings, insulation fabrics and various clothing articles for heat and welding protection.

In the time that followed, decisive investments were made. To increase competitiveness, among other things a new impregnation system, weaving machines, computer technology and an ERP system were implemented.

Under new management the economic strategy of our company was re-organised and adapted to the changed market conditions. The old clothing department was shut down in 2009.

Since 2011, the company CB S.A. has been the sole shareholder of Asglatex Ohorn GmbH. Today, Asglatex has about 50 employees.

In March 2013 Asglatex started the production with a new modern coating line for which also a new production hall was built. Thus, Asglatex is optimally prepared for the demands of customers in the future.

In 2020, CB became part of the international entity Ondura Group which allowed the Asglatex factory to continue to grow and invest.

This website uses cookies to improve your experience while you navigate through the website. Out of these, the cookies that are categorized as necessary are stored on your browser as they are essential for the working of basic functionalities of the website. We also use third-party cookies that help us analyze and understand how you use this website. These cookies will be stored in your browser only with your consent. You also have the option to opt-out of these cookies. But opting out of some of these cookies may affect your browsing experience.
Necessary Always Enabled
Necessary cookies are absolutely essential for the website to function properly. These cookies ensure basic functionalities and security features of the website, anonymously.
Functional
Functional cookies help to perform certain functionalities like sharing the content of the website on social media platforms, collect feedbacks, and other third-party features.
Performance
Performance cookies are used to understand and analyze the key performance indexes of the website which helps in delivering a better user experience for the visitors.
Analytics
Analytical cookies are used to understand how visitors interact with the website. These cookies help provide information on metrics the number of visitors, bounce rate, traffic source, etc.
Advertisement
Advertisement cookies are used to provide visitors with relevant ads and marketing campaigns. These cookies track visitors across websites and collect information to provide customized ads.
Others
Other uncategorized cookies are those that are being analyzed and have not been classified into a category as yet.
SAVE & ACCEPT